Advanced Glycation End Products Cause You to AGE! 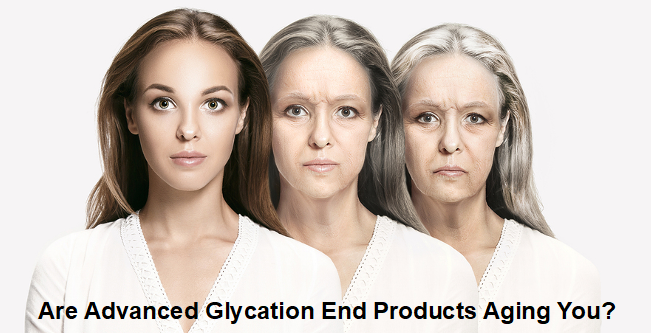 In the battle to slow the aging process you need to take aim at Advanced Glycation End products commonly referred to in the scientific community as AGEs. This article will help you understand how AGEs are formed , what impact they have on aging, and how they contribute to degenerative diseases. To start we need to focus on proteins and sugar.

Proteins are formed from amino acids and are essential for life. They serve two critical roles.

First, they provide structure for the body. One such structural protein is collagen, which accounts for approximately one third of your body’s total protein. It’s found in skin, muscles, organs and vascular structures. And it provides elasticity and cohesion to these structures.

Second, proteins provide function in the form of enzymes that enable all life-sustaining biochemical reactions to occur within your body.

Sugar is a simple carbohydrate. It provides energy for your cells.

When properly controlled, proteins and sugars can interact without causing any damage to the body.

What are Advanced Glycation End Products?

As you age your structural proteins are damaged by a process known as glycation. This process is an uncontrolled, non-enzymatic reaction between proteins and sugars to significantly alter the structure and function of proteins.

In this process a sugar molecule attaches itself to a protein molecule resulting in the formation of a non-functioning glycated protein called Advanced Glycation End products or AGEs. Research over the last 30 years has implicated AGEs in most of the diseases associated with aging like:

Because proteins are present throughout your body, the destructive capacity of Advanced Glycation End products is enormous. Understanding how to prevent the formation of AGEs is critical to slowing the aging process and reducing the risk for degenerative diseases.

There are two primary sources for Advanced Glycation End products. The first source is the food we eat. The browning of food is a cooking technique that helps to give desirable flavor to food. It’s achieved by heating or cooking sugars with proteins in the absence of water, and in this process AGEs are formed. It’s estimated that 30% of food-borne AGEs are absorbed when ingested.

The following chart will help you understand how your cooking method can significant increase your consumption of Advanced Glycation End products:

Because of chronically elevated blood sugar levels, diabetics have consistently faced the challenge of AGEs.

Unfortunately this problem has now become an issue for the general population. Over the past 30 years sugar consumption has increased dramatically. Simple sugars like fructose and galactose undergo glycation at about 10 times a higher rate than glucose. Most sweeteners today are approximately 50% fructose or a fructose derivative.

How AGEs Affect Your Body!

Most of the current theory on aging centers on free radical damage caused by oxidative stress. It’s important to note that most Advanced Glycation End products are formed under similar oxidative conditions. This cross-linking between proteins and sugars seem to be a major contributor to the initiation and development of several degenerative diseases like:

· Alzheimer’s disease – This disease has become the greatest fear for aging adults because of the loss of memory and a person’s inability to think. It’s now the most common cause of dementia for those who are aged 65 and older. Although the exact cause is not yet known, it seems that the formation of AGEs and oxidative damage are significant in the formation of beta-amyloid plaques and neurofibrillary tangles associated with Alzheimer’s disease. Both of these destructive tissues contain significant amounts of AGEs. Additionally, recent research has shown that AGEs form early in the disease process.

· Cardiovascular disease – It’s estimated that 48% of Americans suffer some type of cardiovascular disease. More than 600,000 will die with 49% of those deaths being women and over 50% of them being African American. Advanced Glycation End products are involved in the formation of atherosclerotic plaque and directly damage the endothelial cells that are necessary for nitric oxide production. This damage to the blood vessels also increases the risk for high blood pressure, stroke, and erectile dysfunction.

The damage created by the formation of AGEs is not limited to your brain and heart. It also threatens all your organs especially those that have high concentrations of collagen. AGEs have been associated with pancreatic cancer, melanoma, skin cancers, nerve damage, vision problems, kidney problems and the general aging of your skin.

Suggestions to Protect Yourself from AGEs!

Although both proteins and sugars are involved in the process of creating Advanced Glycation End products, it is excess sugar that is the true source of the problem. With this in mind, the following suggestions are designed to help you reduce the formation of AGEs:

The glycation process was first described in 1911. Yet approximately 100 years later few people in the general population know about its destructive capabilities. Most food manufacturers are not going to be your allies in this battle.

If you want to slow down the aging process, and reduce your risk for the degenerative diseases associated with Advanced Glycation End products, then you need to take aim at reducing your consumption and production of AGEs. This is especially important if you’re diabetic or borderline diabetic. Remember that it’s sugar, and its various forms, that create the potential for AGEs.

Use the steps above to help reduce the formation of AGEs. It’s an essential part of your anti-aging strategy.