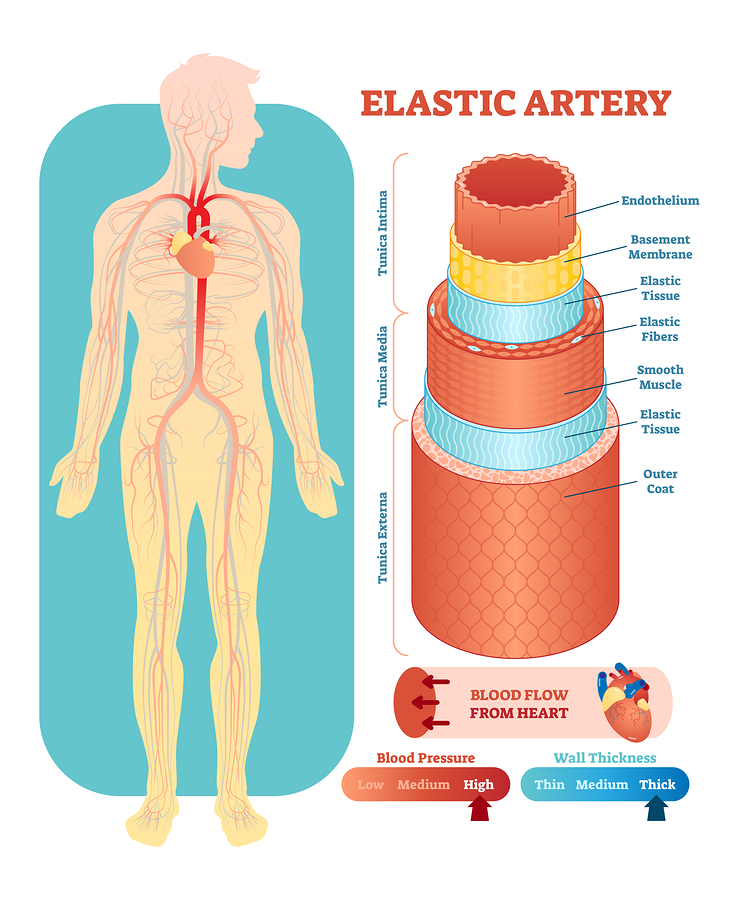 When was the last time anyone ever asked you about your endothelial health?

It’s estimated that there are approximately 60,000 miles of blood vessels in the adult body. These blood vessels include arteries, veins, and capillaries. They’re all protected by a microscopic inner lining of endothelial cells. What is commonly called the endothelium.

It’s important to note that these cells line the entire circulatory system. From the inside of your heart all the way down to your smallest capillary. When added up, the volume of these endothelial cells would cover the surface area of 4 to 8 tennis courts depending upon the size of the individual.

That’s amazing since the endothelium is only one cell thick and can’t be seen by the human eye.

Once discovered, the endothelium was classified as an inert membrane whose primary function was to keep the blood in the circulatory system and out of the body’s tissues and organs.

Research over the last 25 years has shown that your endothelium is an active, multi-functional tissue that plays a vital role in metabolic, immunologic, and cardiovascular health.

Or is your endothelium an organ?

Quoting from a 2004 PubMed article titled “Endothelium as an organ”

“The endothelium is a highly dynamic cell layer that is involved in a multitude of physiologic functions, including the control of vasomotor tone, the trafficking of cells and nutrients, the maintenance of blood fluidity, and the growth of new blood vessels. Over the past several decades, advances in basic research of the endothelium . . .have created a conceptual blind spot, namely, the inability to appreciate the endothelium for what it is: a cell layer that is teeming with life, every bit as active as any other organ in the body. The overall goal of this review is to bring the endothelium “to life” and to argue that future breakthroughs in biomedicine are contingent on acceptance of the endothelium as a bona fide organ system.”

Whether you classify the endothelium as a tissue or organ, it’s now considered to be the single largest secreting entity in the body.

Endothelial health is so important that the 1998 Nobel Prize in Medicine was awarded to three American researchers who discovered how the endothelium converts the amino acid L-arginine into nitric oxide – the master signaling molecule of your entire cardiovascular system.

Because endothelial cells line every blood vessel they play an important role in the proper function of every organ in your body. The following is a list of the known functions of the endothelium:

Angiogenesis – The formation of new capillaries is called angiogenesis and is regulated in part by the endothelium. Endothelial health is extremely important in wound healing. It also plays a significant role in muscle creation and in the heart’s ability to develop collateral vessels. These collateral vessels can help lessen the impact of a blood vessel blockage in the heart by providing alternative routes for blood flow.

Blood Flow – Your endothelium helps to facilitate blood flow. It does this by providing a smooth surface that inhibits platelet adhesion and clotting. It also tries to inhibit foreign substances from adhering to its cellular wall, which can lead to plaque formations.

Molecules like oxidized LDL (bad) cholesterol and/or toxic substances like nicotine damage the intercellular junctions between the endothelial cells allowing deposits to build up. This causes the smooth and flexible lining of your blood vessels to become rough and hard to directly impact endothelial health.

It’s these plaque formations that are at the heart of atherosclerosis.

As this process continues over time, the deposits or plaques become larger, which narrows the interior of the blood vessel making it harder for blood to pass through. This increases resistance to blood flow and can cause your blood pressure to increase.

The following damage the endothelium and increase these formations:

Atherosclerosis was once thought to be irreversible. But new studies clearly show that when the proper biochemical environment is provided the injured endothelium can return to its undamaged state. Proper supplementation with L-arginine, the precursor for nitric oxide, has been shown to diminish lesion formation, reverse endothelial dysfunction, and lead to improved endothelial health.

Blood Clotting – The narrowing of your blood vessels also causes blood turbulence that can lead to the formation of blood clots. These blood clots, if large enough or if they pass through too narrow of an opening, can eventually lodge themselves in a blood vessel causing a blockage. When this happens in the heart we call it a heart attack. When it happens in the brain it’s called a stroke.

The endothelial cells produce a molecule called nitric oxide, which inhibits platelet adhesion, activation, secretion and aggregation, and promotes platelet disaggregation. Nitric oxide is extremely important in preventing blood clots in the vascular system to lessen the risk for heart attacks and strokes.

It’s interesting to note that the endothelial cells are also necessary for blood to clot. They synthesize the vitally important molecule called Factor VIII or von Willibrand’s Factor, which is essential for blood clotting. Without this molecule a person could bleed to death from a simple scratch.

Specialized barrier function – Endothelial cells act as selective filters to regulate the passage of gases, fluids, and various molecules across their membranes. For example, in the brain and retina the endothelial cells are tightly linked together to create a barrier that only allows selective molecules to pass through it.

In the liver, spleen, and bone marrow, the endothelial cells are loosely linked allowing for cellular trafficking between their intercellular gaps.

However, in the kidneys, endocrine glands, and intestinal villi, the endothelial cells have a different type of selective permeability to allow for efficient filtering, secretion, and absorption based on that organ’s function.

Immune System – Endothelial health is also critical to the proper function of your immune system. Your white blood cells are produced in the bone marrow. They travel through the blood stream where the endothelial cells facilitate their passage into your body’s tissue to allow them to destroy foreign agents or antigens. This gate-keeping role varies for each organ system but is dependent upon endothelial health and function.

It’s amazing that a simple lining of cells on the interior walls of your blood vessels could have such a profound affect on your cardiovascular health and overall wellness. Yet that’s exactly the case with your endothelial cells. Endothelial health is critical to your health and your body’s ability to produce nitric oxide – the master signaling molecule of your entire cardiovascular system. When impaired, endothelial dysfunction has been linked to the following diseases:

This means that you have the ability to prevent most of these diseases by focusing your attention on ways to improve your endothelial health and function.