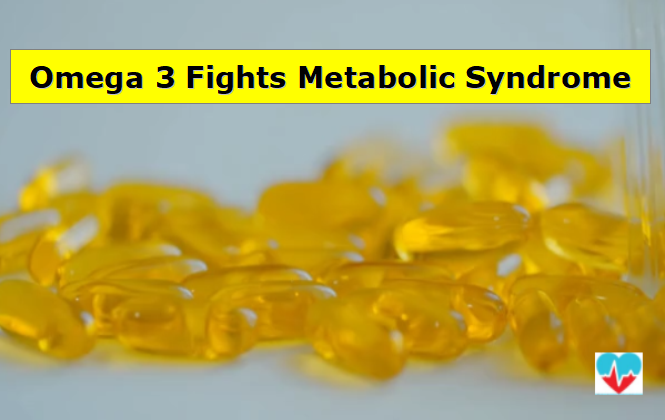 Why is this important?

Because metabolic syndrome increases your risk for the following illnesses:

(If you would prefer to view this information in a video format, then please click on my YouTube video below:)

If you’re over 60 years old and live in the United States, then you’re 50% more likely to have metabolic syndrome, which increases your risk for these illnesses.

The term “Metabolic Syndrome” applies to anyone who has at least three of the following five metabolic disorders:

Two of these parameters (waist circumference and blood pressure) you can directly measure on your own. The other three you would need a blood test to determine.

These 5 metabolic disorders are closely linked to insulin resistance and chronic inflammation.

Most fish oil contains a blend of omega 3 fatty acids. Usually in the form of EPA (eicosapentaenoic acid) and DHA (docosahexaenoic acid).

In one study of 39 overweight adults, they were spit into two groups. Both groups followed a healthy lifestyle program. But one group also added a daily fish oil to their meals. This fish oil contained 540 mg of EPA and 360 mg of DHA.

By the end of the five months, the group taking the fish oil had significantly reduced markers for metabolic syndrome.

In another randomized, controlled study, 68 adults with Type II Diabetes took either a placebo or a DHA rich fish oil.

The group who took 700 – 1620 mg of DHA decreased both their body and belly fat. The fish oil group lost 0.5 to 1 inch from their waistline. While the placebo group gained 0.5 inch during this same time period.

In both studies, the fish oil with omega 3 decreased inflammation. As I’ve noted in other articles about omega 3, this key nutrient turns off inflammatory responses and helps to promote tissue repair.

And the ability of omega 3 to lower insulin resistance in diabetics was even more pronounced.

A meta-analysis of 30 human trials showed that 67%, or twenty of these studies, provided at least one benefit when compared to the placebo groups. This included:

The health benefits of fish oil is now recognized by the FDA. In 2019 the FDA approved the health claim that omega 3 fatty acids EPA and DHA may reduce the risk for high blood pressure and coronary heart disease.

For heart health benefits it’s recommended that the daily consumption would be 1000 mg of fish oil. Some would recommend the intake to be as high as 2000 mg per day.

Most good supplements will provide at least 1000 mg of fish oil with the ratio of EPA being twice that of DHA.

And for proper absorption, it is best to take your omega 3 supplement with a meal.