Supporting Your Gut Health According to Daniel 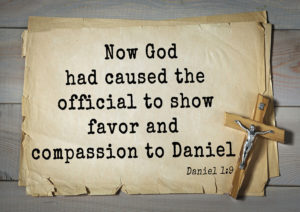 So did it help Daniel improve his health?

Well before we answer that question, here’s a brief backstory from the Book of Daniel: King Nebuchadnezzar of Babylon had captured the town of Jerusalem and taken the young men of Judah’s royal family and others back to the land of Babylonia.

These captives were put into a three year training program and would then enter the royal service. Part of getting them ready for service was to feed them the royal diet.

What was the royal diet? We’ll discus this in a little bit but first let’s read the Holy Scriptures from Daniel Chapter 1 Versus 8-16:

“8But Daniel was determined not to defile himself by eating the food and wine given to them by the king. He asked the chief of staff for permission not to eat these unacceptable foods. 9Now God had given the chief of staff both respect and affection for Daniel. 10But he responded, ‘I am afraid of my lord the king, who has ordered that you eat this food and wine. If you become pale and thin compared to the other youths your age, I am afraid the king will have me beheaded.’

11Danile spoke with the attendant who had been appointed by the chief of staff to look after Daniel, Hananiah, Mishael, and Azariah. 12’Please test us for ten days on a diet of vegetables and water,’ Daniel said. 13’At the end of the ten days, see how we look compared to the other young men who are eating the king’s food. Then make your decision in light of what you see.’ 14The attendant agreed to Daniel’s suggestion and tested them for ten days.

15At the end of the ten days, Daniel and his three friends looked healthier and better nourished than the young men who had been eating the food assigned by the king. 16So after that, the attendant fed them only vegetables instead of the food and wine provided for the others.” Daniel Chapter 1 Versus 8-16 New Living Translation

Supporting Your Gut Health – Daniel’s Choices versus the King Menu

As you can read from the above passage, Daniel was able to present two food choices to those who oversaw him and his friends. They were:

In researching what King Nebuchadnezzar’s food might have been the following items consistently show up:

Now before you think that Daniel lived on lettuce and water for 10 days, let’s look at the potential vegetables he would have had access to, especially since his was eating from the king’s garden:

And as we asked at the beginning of this blog post, “did it help Daniel improve his health?”

And the answer is YES!

According to Scripture at the end of ten days Daniel and his friends “looked healthier and better nourished than the young men who had been eating the food assigned by the king.”

On page 26 of our Microbiome Research eBook we talk about the 3 Es and 4 Rs For Gut Health. The 3 Es are:

and the way you eliminate these 3 factors is to use the 4 Rs, which are:

While some of the foods that were part of the king’s menu would have been good in supporting your gut health, most likely the predominate choices made centered on eating meat and drinking wine. These choices would have damaged the gut and created the potential for dybiosis, inflammation, and leaky gut.

Daniel’s choices were just the opposite. He removed the foods and factors that would have damaged his gut. And he replaced them with healing foods. Many of the vegetables he had access to would have given him specific supplements that would help repair any damage to his gut microbiome.

And if any of the vegetables were fermented, then we would have also consumed both prebiotics and probiotics that would have help colonize his gut microbiome with good bacteria.

Be like Daniel and take the 10 day challenge. Instead of consuming the Standard American Diet of animal protein, processed carbohydrates, and dark cola drinks, switch to a vegetable based diet.

Or try the Whole30 program.

And enjoy extensive health benefits when you are properly supporting your gut health.