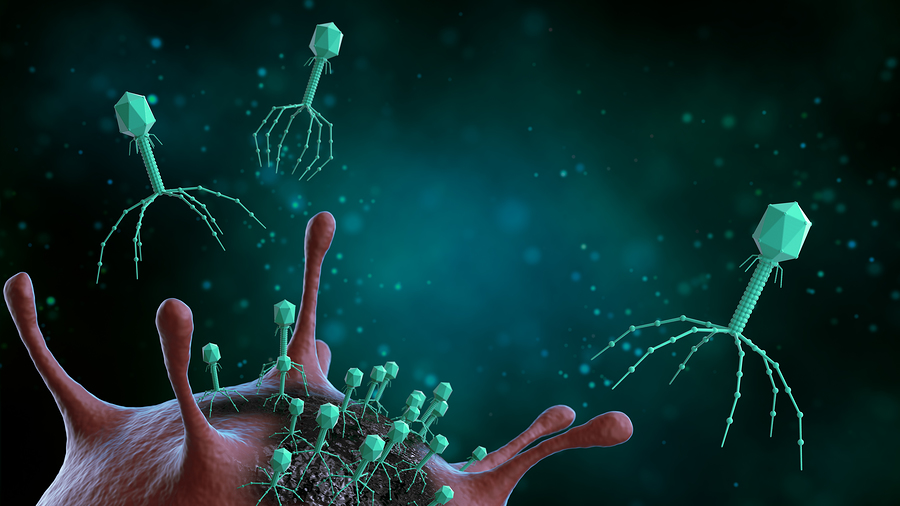 Bacteriophages are healthy viruses that can play an important role in protecting you from harmful bacteria. As well as boost your immune system. And provide protect from the viruses that can cause respiratory illnesses.

So what are bacteriophages?

Bacteriophages are tiny viruses that inflect harmful bacteria. They are so small that they are not even a single cell. Instead, they are just a piece of either DNA or RNA wrapped in a protein coat.

And they seek out and selectively eliminate ONLY harmful bacteria.

This method to destroy harmful bacteria through bacteriophages is not new. Science calls the study of this type of virus Phage Therapy. It’s history goes all the way back to before World War 1.

In the 1940s Eli Lilly and L-Oreal had developed bacteriophage “cocktails” that were used to effectively treat infections.

However, with the development of powerful antibiotics, Phage Therapy took a back seat. And for the most part forgotten.

This dependence on antibiotics has a downside.

They eliminate both the harmful and healthy bacteria. This leaves people vulnerable to other organisms especially when the antibiotic treatment is over.

Not the case with the use of bacteriophages as they only target and eliminate detrimental bacteria.

This means that the bad bacteria are destroyed, which allows the good bacteria to thrive.

This concept that bacteriophages are healthy viruses is reemerging as scientist learn how important your gut microbiome is to your overall immune system.

Several studies have been conducted with both animals and humans to show how Phage Therapy can treat infections of the gastrointestinal tract, skin, head, neck, bone, chest, and abdomen.

And the success rate is in the 80 to 95% range with no side effects, or only mild and reversible ones.

These promising results have lead to the development of a Probiotic/Bacteriophages cocktail of 7 specific probiotics with 4 different types of bacteriophages to significantly decrease harmful bacteria in the gut while allowing the beneficial bacteria to grow and dominate.

This dual-encapsulation format has become an innovative way to improve digestive and overall health.

One animal study with mice combined the healthy probiotic B. longum with a bacteriophage that specifically targets E. coli. The mice were split into two group. One group got only the probiotic. The other group received the phage combination. After just 24 hours, the phage-treated mice had:

The phage-treated mice had improved digestive function with no detrimental side effects.

Recent research on probiotics has revealed how they stimulate and boost mucosal defenses for both the gastrointestinal and respiratory systems. This dual effect of boosting immune function and mucosal defense helps to decrease the incidence of viral infections. And for those that do get a viral infection, reduces their severity.

One study specifically evaluated a blend of probiotics that included B. lactis, L. plantarum, and L. rhammnosus. The 90 day study randomized 250 healthy adults to receive either the probiotic blend or a placebo. Here are the results:

Plus the length of illness was also reduced:

Pretty significantly. It will be interesting to see how the combination of probiotic stains with Phage Therapy can make even better improvements in gut health and immune system response.

One leading manufacturer is now offering this type of combination to address these two areas. Click here for more information on this product.